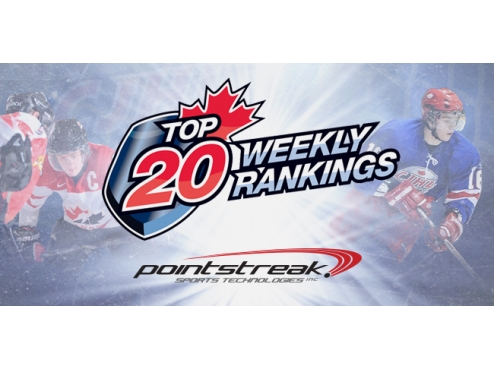 CALGARY, Alberta (February 16, 2015) – The Portage Terriers of the MJHL crossed the magical 50-wins in a regular season mark this past weekend, and the upcoming hosts of the 2015 RBC Cup continue to look like the team of destiny in the CJHL. However, it is playoff time when legends are born, and where unthinkable upsets can occur.

The top teams seem to be set in the BCHL with two weeks remaining in their regular season, but teams like the Salmon Arm Silverbacks have some work left to do in order to secure a playoff spot. The Powell River Kings and Langley Rivermen still have to keep winning to secure home-ice advantage in the first round of the BCHL playoffs. The Spruce Grove Saints saw their lengthy winning streak come to an end this past week, but the Saints are still the cream of the crop in Alberta, and the remaining playoff teams are fighting to gain their best match-up’s in the AJHL’s first round of playoffs.

The Melfort Mustangs and the Kindersley Klippers have run away from the rest of the SJHL, but the Notre Dame Hounds have picked the perfect time to heat up, and are on a 7-2-0-1 streak over their past ten games.

The Steinbach Pistons won a decisive victory over their MJHL rival the Winnipeg Blues this past week and are only a single point behind the Blues with two games in hand as the season draws to a close.

The Fort Frances Lakers, hosts of the upcoming Dudley Hewitt Cup, remain firmly on top of the SIJHL standings; while the NOJHL has a dogfight on its hands for top spot overall between the Soo Thunderbirds and the Kirkland Lake Gold Miners, with the Elliot Lake Wildcats quietly sneaking into the race.

The Aurora Tigers have nearly locked up top spot overall in the OJHL over the Trenton Golden Hawks and the Georgetown Raiders, while the Carleton Place Canadians have a 22-point lead over the host team of the upcoming Fred Page Cup – the Cornwall Colts, in the CCHL’s Robinson Division.

The Sherbrooke Cougars remain ahead of the College Francais de Longueuil for the overall lead in the LHJQ standings with one game in hand. While relentless winter weather has continued to cause havoc in the MHL, with more games being postponed this past weekend.  The Woodstock Slammers remain at the top of the standings in the MHL with Dieppe Commandos also continuing with success.

About the Top 20 Rankings – The Pointstreak CJHL Top 20 Weekly Rankings are produced in conjunction with International Scouting Services (ISS) and are based upon a variety of factors, including the league in which the team plays, winning percentage, win-loss record, total points accumulated, goals-for versus goals-against ratio, etc.

About the CJHL – The Canadian Junior Hockey League is a national organization comprised of all 10 Junior A hockey leagues in Canada.  The CJHL represents than 129 teams and 2,900 players and has over 2,951 former players furthering their hockey careers at the professional, major junior and college level across North America.  For latest CJHL news and features, visit www.cjhlhockey.com and follow us on Twitter at twitter.com/cjhlhockey or @cjhlhockey.

About Pointstreak – Specialized for the needs of leagues, teams, associations and governing bodies, Pointstreak Sports Technologies’ solutions streamline operations and improve the experience of sports participants, fans and media. Check out Pointstreak’s homepage, product information site or company site to learn more or connect on Facebook, Twitter, LinkedIn, Google+ , YouTube and our blog.